Who was Chris Musando or Chris Msando or CHRISTOPHER CHEGE MSANDO?

You must be too sophisticated and security conscious to escape Google, Facebook and LinkedIn. Yet that is what the late Independent Electoral and Boundaries Commission, the

You must be too sophisticated and security conscious to escape Google, Facebook and LinkedIn. Yet that is what the late Independent Electoral and Boundaries Commission, the (IEBC) ICT top honcho, Chris Msando, almost achieved.There are limited records of his career and education background on major social networks and search engines.

However, the news of the death of Chris Msando or Chris Musando have dominated the media – TV, social networks and print. The late has been described as one of the most highly educated IT experts at IEBC who was instrumental in the setup and management of the electronic election management system to be used in the August 2017 Kenya elections. Specifically, the late is reported to have been one of the very few persons who knew the exact physical location of the IEBC servers that are to be used in the transmission of the 8th August 2017 Presidential elections results.  Some observers have said that his untimely death is a blow to a free and fair elections. This school of thought insinuate that he could have been hand squeezed to disclose such finer details and that he died for his oath of secrecy.

If that narrative were correct, it makes Chris Msandoa Kenyan hero.

Based on the media stories following his death, Chris is a professional whose life needs documentation to empower other young East Africans to emulate.

On this basis, I tried to prowl the Internet for his digital footprint.

Searches in exclusive on-line databases for private investigators returned nill values. So were the searches on ICT certification membership, except ISACA which returned a value of a Chris Msando who is a Certified Information Systems Auditor (CISA). Is this qualification for Chris? Without an official press release, it is difficult to get the facts in full.

On this note, we hereby request IEBC to release the public profile of Chris Msando – full names, education, work experience, training attained and national ID – to set the record straight so that a befitting tribute may be paid to the late. What is his education background – primary, secondary and University? Which years was he in those schools? Who are his known OB’s? What was his first job and where? Who were the supervisors? When and how was he recruited at IEBC? Was he head hunted or it was following a competitive job advert? What were his ICT credentials? How did he raise to the ranks at IEBC? Answers to these questions will provide insights to the possible threats to his career. Was his death family or job or politics related?

Given the fact he was working at the IEBC, I don’t think he had a known political affiliation – he was independent. It is therefore in the interests of Government of Kenya to bring the culprits to book.

They say the best prayer for your enemies is for them to have a long life. So, which friend of Chris would have wanted him dead that quick? Considering his reported role as a key IT expert in the effective implementation of the national voting system, the timing of his death is a blow to democracy in Kenya which has to be and be seen to be free and fair. So who would have wanted the Chris dead?

Obviously, when it comes to politics, the line between friend and enemy is blurred. Any one can say any prayer at any time. This is a test to the Kenyan police to undertake a thorough investigation and bring the culprits to book. An analysis of the Chris Msando’s lifestyle is key. Was the death political or work related? Was it a family feud? Who exactly would have wanted him dead? Failure to provide clear answers to these and exclude political linkage to the crime leaves the credibility of the forthcoming elections with dark spots, regardless of the eventual outcome.

At this time, our prayer here in Uganda is not to allow such a death to be politicized. No one leaves life alive. However, the nature of our departure matters.

Below are analysis of Chris Msando’s online absence. 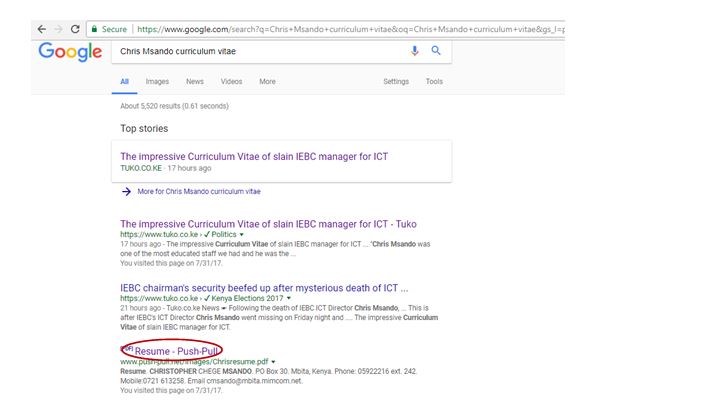 Figure 1. the search of “Chris Msando curriculum vitae” returns a PDF Resume; URL http://www.push-pull.net/images/Chrisresume.pdf According to the resume, Chris attained a Bachelor of Science (Information Systems Development and Telecommunications Management, Murdoch University, Western Australia in 2001 as well as had a Diploma of Business, (Computing and Information Technology) from Alexander Institute of Technology, Perth, Western Australia.

And at the time of writing the resume, he was a Web pages Designer/Database Designer at ICIPE Thomas Odhiambo Campus, Mbita. And that “my duties involve Research Database design and maintenance, deploying the same database in web based applications for worldwide access. Digital photography for web content. VAST link and network Administration and maintenance, databases and network troubleshooting.”

Without the official press release of the public profile from the IEBC, we are unable to confirm whether this profile is that of Chris Msando. Otherwise, the Chris in the online profile is a good at networking, databases and applications. 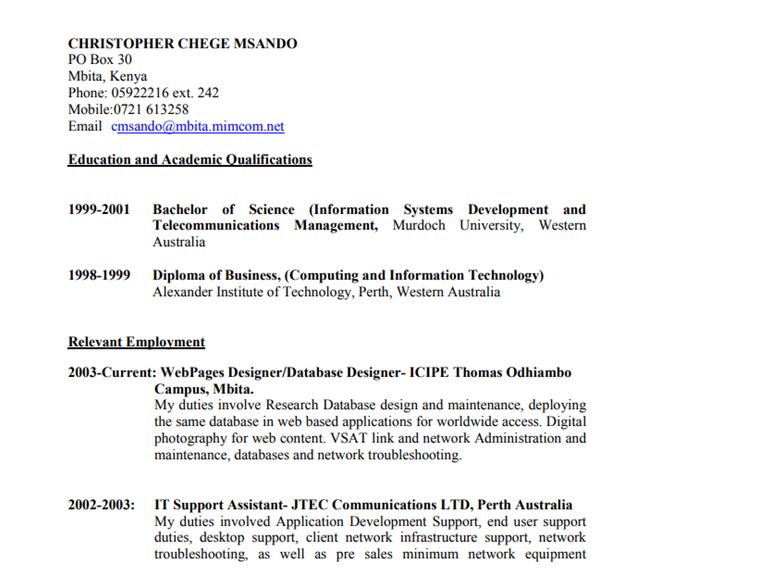 Figure 2: Resume returned upon the search of the name “Chris Msando curriculum vitae” in Google. 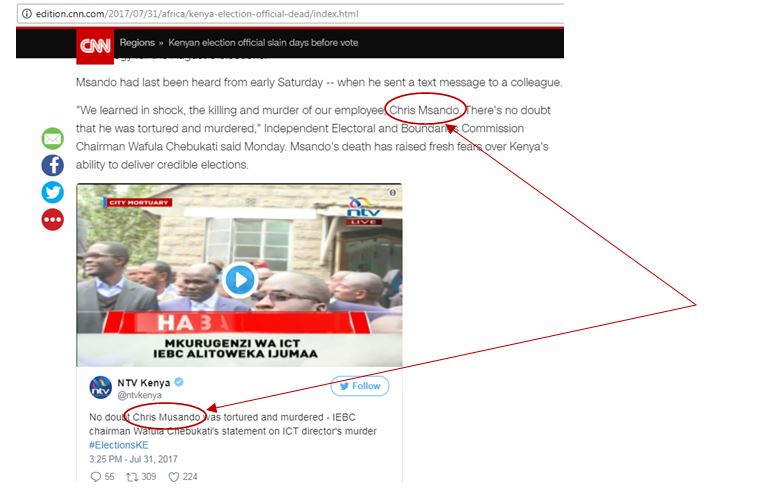 Figure 3, the family name of Chris is not consistent. NTV Kenya reported a “Chris Musando” while CNN captured “Chris Msando”, which is which? Without the official press release from the IEBC; with a clear public profile and career of the Chris Msando (RIP) at the commission, it may be difficult to understand the man we have lost. 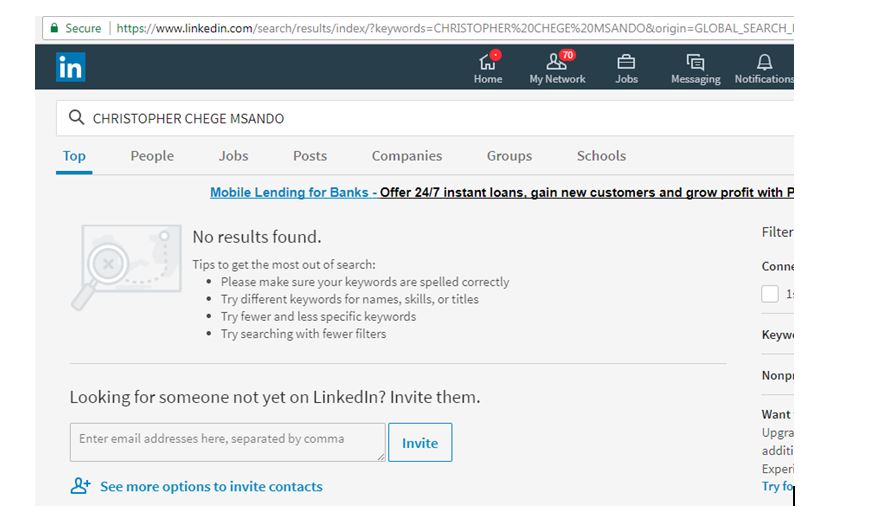 Figure 4: “CHRISTOPHER CHEGE MSANDO” returns a nil value when searched on LinkedIn. This implies that such names or profile of the person with such names do not exist on the LinkedIn site. 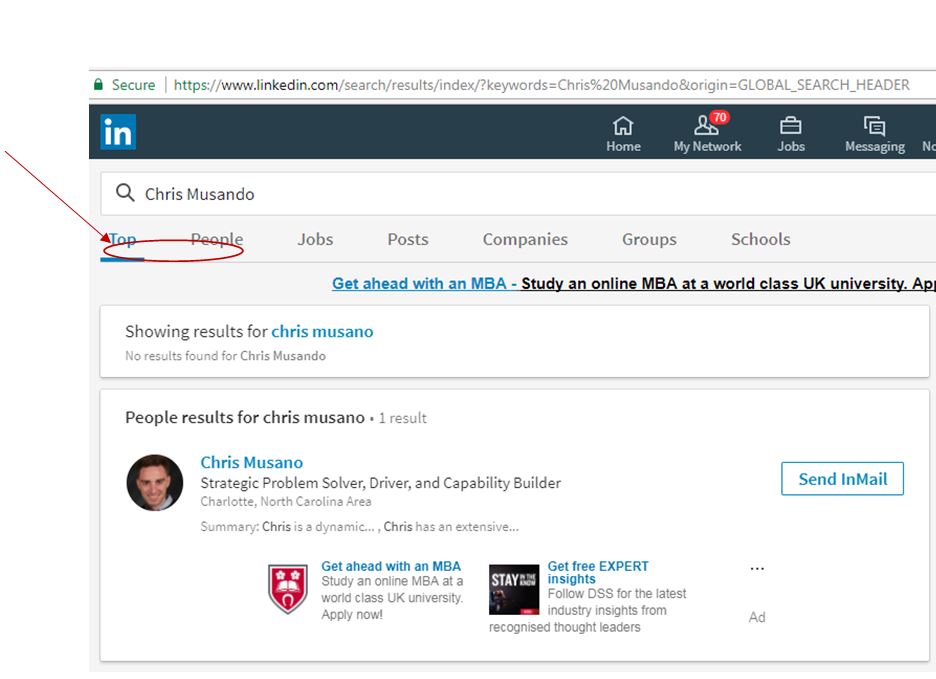 Figure 5: “Chris Musando” returns a nil value when searched on LinkedIn. This also means the profile with the same names does not exist on LinkedIn. 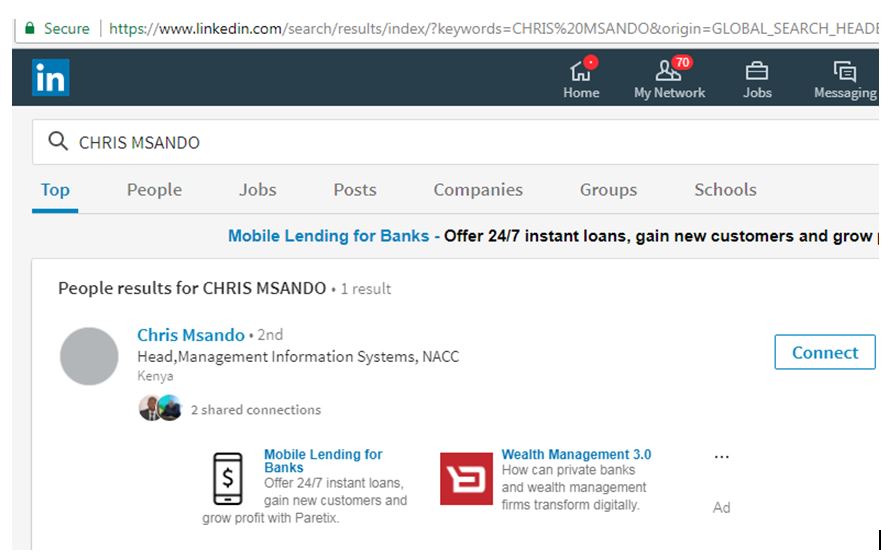 Figure 6:“Chris Msando” returns a value when searched on LinkedIn. This also means the profile with the same names exists on LinkedIn. The question is whether this returned profile is of that Chris Msando who worked at IEBC at the time of his death. 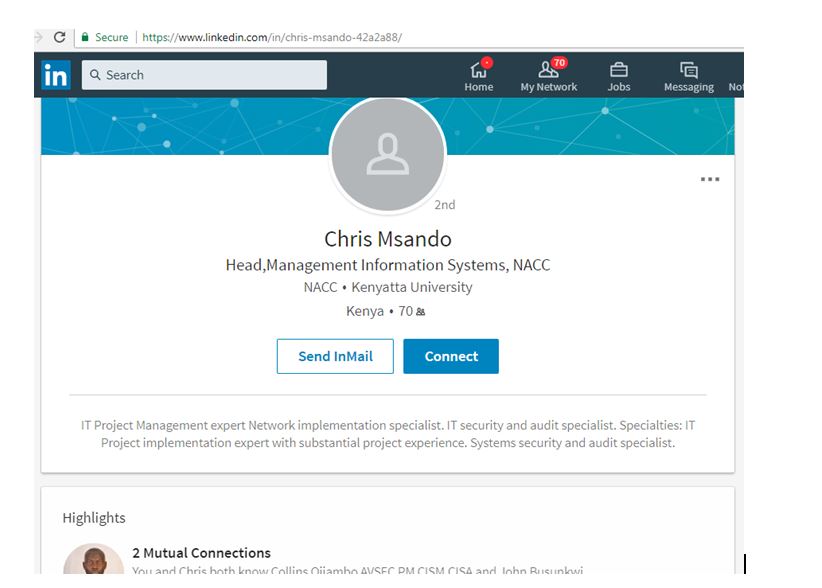 Figure 7: Chris Nsando profile on LinkedIn shows he works at NACC, Kenyatta University as Head Management Information Systems. An analysis of the PDF resume in Figure 2 does not show any prior working experience by Chris at NACC, indicating the profile was written long time ago or that the profile could be of another person. 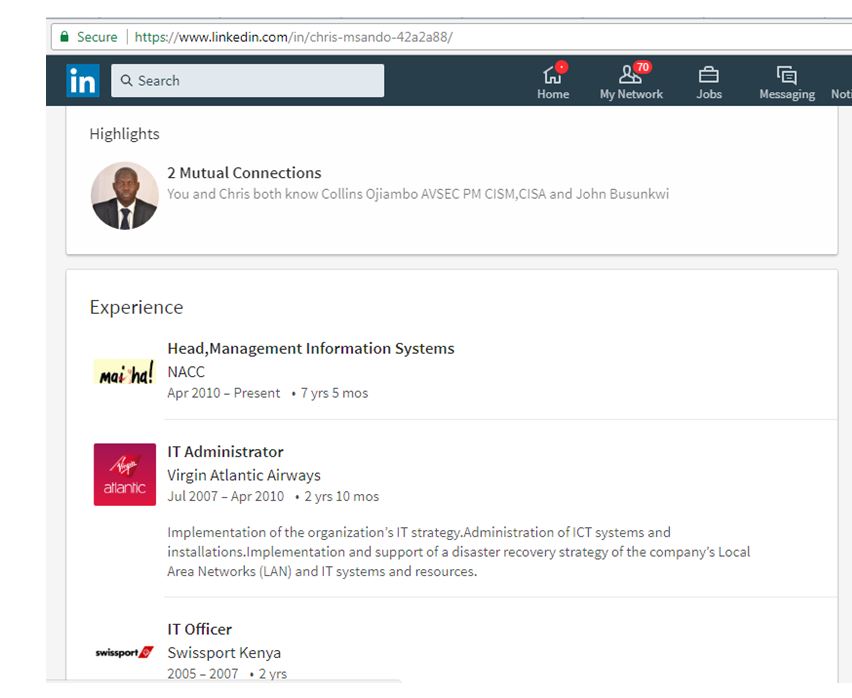 Figure 8; Further review of the profile found on LinkedIn shows that this Chris worked at Virgin Atlantic Airways as IT Administrator, and also previously at Swiss port, Kenya in 2005 to 2007. 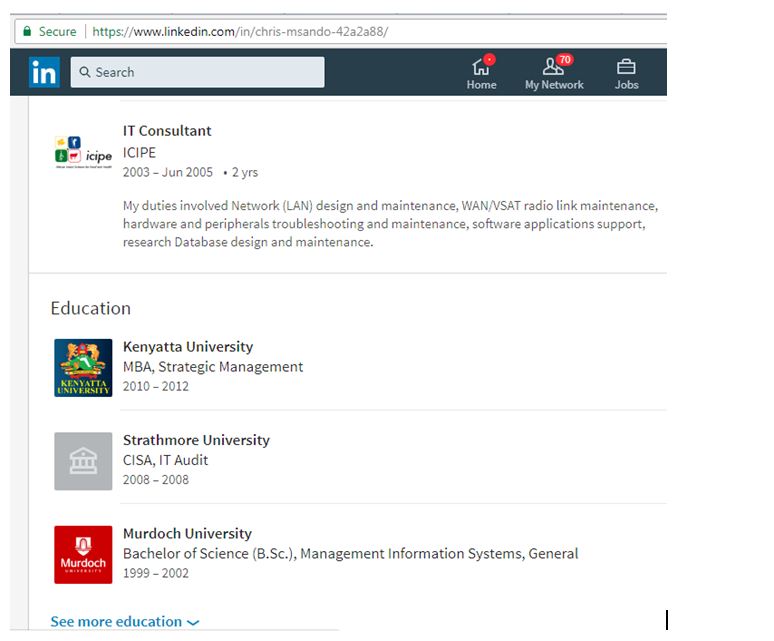 Figure 9; the Chris on LinkedIn is a CISA, and holds an MBA in strategic management as well as Bachelor of Science in Management Information Systems. Detailed scrutiny shows some consistency between the LinkedIn profile and Figure 2 profile. Both show that Chris attended Mudoch University from 1999 for a Bachelor of Science in Management Information Systems, and also both show the work history at ICIPE from 2003 as IT Consultant.  This similarity in profiles points to the fact that both these profiles are of Chris.

And therefore Chris Nsando is the same as Christopher ChegeMsando.

We are sure these are the same facts that the reporters at https://www.tuko.co.ke/248250-the-impressive-curriculum-vitae-slain-iebc-manager-ict.html, see Figure 10. Could have relied on. 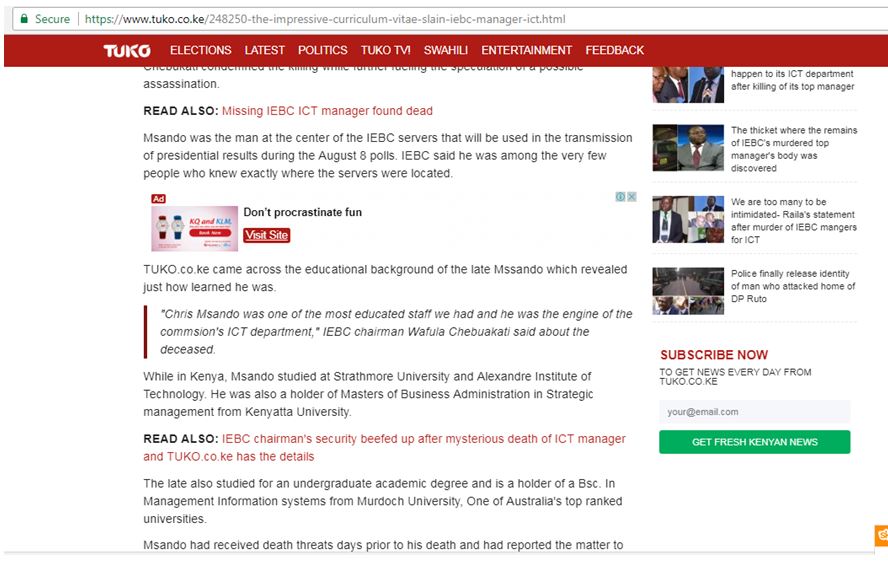 An official press release from IEBC is needed urgently to confirm the above findings. Otherwise, based on the profiles found on-line, Chris was indeed a highly educated and exposed man. Kenya has lost a great resource. IT professionals too have lost a great peer.

May His Soul Rest In Eternal Peace.

The Moyes’s win or exit ultimatum and lessons for leaders 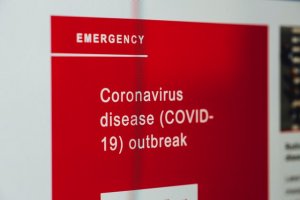 The invisible pandemic: go away #covid19