Continued from Part 1. To get the picture of the challenge, I tried to scan forms. It took almost 3-6 minutes to get the

To get the picture of the challenge, I tried to scan forms. It took almost 3-6 minutes to get the form ready. I imagined if one form took about six minutes, that meant in an hour a person could only scan a maximum of 20 forms, and that is for the most efficient folk. And the other processes of accessing the form, scanning it, and going back to store it, took lots of time too.

I then moved around the people I had found, asking them about their experience. And their pain was clear: the scanners were slower. They had bought bad scanners for the job. Everyone complained about the bad scanners. However, not even the Manager of the scanning operations had ever seen the user manual of the scanners. They had just been shown how to get the form, place it in the scan, and save to PDF on a specific folder on the server. And that is all.

After five days on the job, I went to the head of IT and asked for the details about the scanners. Being an ACCA student who had aced the business computing exam, I knew computers were there to make things easy not tough.

The head of IT disappeared for a few minutes, and returned with a big document, which upon examination read “Scanner User Manual.” The head of IT was a slender, soft-spoken man, he simply said “go read this.”

Now as a student we had a project called “operation read to complete the revision kit.” Before the exam, in a group of two to three, we would find three to four nights to read, page by page, the entire revision kit. Reading a 569 or so pages scanner with pictures was music to my eyes. That day, I left early for home. After supper, I opened the Scanner manual with just one objective: “operation complete the reading of the Scanner User manual.”

You may also read: Are you a good role model to all folks in your circles?

That night, I discovered how to adjust the scanner speeds, resolution, and scanner quality. How to auto set the scanner for automatic feeding to scan continuously per document and organize the records.

The following morning, I returned to the office. We had about 13 people scanning the customer KYC forms. I went to their computers and scanners and set up everything as I had read. Instead of wasting time trying to feed in the documents, I just showed them how to arrange them for automatic feed in and scanning. The job became so enjoyable. I helped reduce the scanning time from about 3 minutes perform to 20 seconds. Productivity went through the roof, and within less than a year, the project that had been anticipated to take over 5 years had been completed. We were on track with the new forms being created meaning the project was ready for live operation. No more scanning backlog.

In appreciation, management gave me a Spot Award of Ugx. 150,000 for having impacted the business process and improved efficiency. It was a big prize money for me at the time.

It all boils down to attitude. What is your attitude to life? 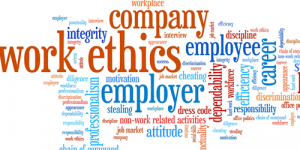 Crossing the Ethical Boundary part 1: Insights from a fraud investigator.

Here is how to implement “Know Your Staff” policy effectively The only way to overcome fraud challenges