Classified information is that Vodafone plans to acquire Orange Uganda Ltd operations and plans are underway at the group level for an initial due diligence aimed at a high-level business case. Vodafone has presence in Europe, Africa, Middle East and Asia Pacific. Vodafone’s biggest challenge is data. Of the British Pound Sterling 9,885 million they plan to make in 2013/14 quarter 2, only 1,887m Pound Sterling will come from data (table 1 below). That is just 20%, which is not rosy considering telecoms are moving to value added services. Acquiring Orange in Uganda represents the best strategy as the company already has good data services; with about 65% of Orange Uganda revenue coming from data (internet services).

This transaction makes sense for Vodafone. Every telecom with a significant customer base incurs interconnect costs to most destinations worldwide.

For example, if I am in Uganda and want to call a person say in Angola, my network operator (Orange Uganda) has to pay (interconnect costs) to the international traffic carrier who in turn pays the local career in Angola (the network where the local person you are calling uses). If Orange Uganda had operations (a telecom network) in Angola, they would not need to pay any third party to complete the call. They would just connect the caller to their own Orange network in Angola, and voila, the call is completed at a very low cost.

For this reason, Vodafone would be interested in having a footprint in Uganda.

If you look at Uganda, companies like Airtel (that recently acquired Warid) have about 25% of their total revenue from interconnect.

Remember, Vodafone had shown interest to buy Warid, which they let go to Airtel for a strategic reason. Warid’s subscribers were found to be mass market; with a below market average revenue per user (ARPU); and very high average cost per user (ACPU), giving a bad sustainability position. The best strategy for anyone who bought Warid was to consolidate, reduce costs and leverage from reduced interconnect costs as a result of increased subscriber base, thereafter, undertake aggressive mobile push marketing (something like spamming your subscribers) – a model Vodafone found not for them. They like class; and that is Orange Uganda is the best option, if at all they were to sell.

The purchase of Orange by Vodafone would enable them to:

–       Due to low or no interconnect fees, Vodafone would be able to offer low rates for international calls routing through Uganda

–       Survive in the market — usually, for new telecoms (with few subscribers) they are at the mercy of a big player (with large numbers) especially if the regulatory body is not powerful to intervene and fix minimum and maximum prices for interconnect. A new telecom needs the existing one to enable its (few) subscribers call to friends on the big network. That is why, we expect a lot of partnerships and acquisitions in telecom markets in Africa; if the industry is to stabilize and grow.

Since joining the market in 2009, Orange has found it extremely difficult to make net acquisitions especially for its voice subscribers. This has impacted negatively on the company’s cost structure.

The top three costs for an average telecom in Uganda are:

c) staff costs and IT (billing systems and software) upgrades (about 15% of the total revenue).

Given their subscriber base, and about 60-75% of their revenue from data, one would estimate Orange’s monthly revenue to cap at about Ugx. 0.8 to 1.2 billion daily (about Ugx. 15billion monthly revenue) it is far ahead of UTL at about Ugx. 0.5 billion daily! Considering costs in telecoms, this may not be enough for the company to break-even; unless they have more than 3-4 million subscribers. This reason is enough for Orange to sell and focus on other markets.

Also, thanks to MTN’s successful mobile money, Orange’s Orange money has not picked up well.

In Uganda, a telecom needs a minimum of 3m [active] subscribers to able to break-even. At about 800k active subscribers, is too low to enable the company pay interconnect fees (which is a high cost, if your subscribers are few). It is likely that since 2009, Orange Uganda is yet to break-even. Now that is a bad position for any business venture and makes it a great candidate for being bought.

Any valuation of Orange Uganda would focus on her data services – currently contributing at least at 60-75% of their total revenue. Their advantage is the corporate customers using their data – something MTN has not aggressively taken on, but seems to be the next battle field for 2014.

Orange’s data product was so good that it came at the expense of other providers who recorded a big churn. The main culprits were UTL and Airtel. Confidential telecom research done in 2011 by SBR www.sbreview.net indicated a high churn rate in data use from UTL and Airtel.  By then MTN too was a culprit as it had not yet streamlined their house to offer a consistent and high-end product for the corporate world. Orange Ug seized the opportunity, and gained ground getting the likes of KCCA, URA, etc… top corporates with consistent revenue streams and such clients have been critical for the company’s strong presence in the market.

MTN’s response has been investing in infrastructure and the bold and ambitious MTN Business solutions services – something Orange seems to be getting concerned about. And MTN’s timing is ideal because the competition is not organized as they have more big issues to address in-house:

Airtel is trying to push Airtel money and fix Warid acquisition glitches that are still apparent especially the post-acquisition and consolidation ghosts – selling off property, running an ambitious marketing campaign for Airtel money and managing new staff expectations – something that may take them another 3 years. It is so bad that even nine months post acquisition, Airtel still advertises “join our 7.2 million subscribers”, no effort has been done to increase on the numbers as they look at consolidating, cleaning the duplicated database, and getting surprised at the reduced figures following the rather hazy nation-wide customer registration exercise in Uganda by UCC –MTN has just fixed their mobile money and are putting their head into the data space in a strategic way (though they are yet to market the services in the MTN way we all know).

UTL has lost about four CEOs in succession over a period of just two years! Add the impact on the company following the crisis in Libya, and the generally loss of good talent to the competition, the company is just trying to put the house in order, and has no time to face any serious competitor.

The best thing that happened to MTN Mazen Mroué, the new MTN CEO that has re-energized the company through his great skills in people and change management.  He has overseen the fixing of their mobile money; increased product diversification, tackled fraud and misconduct head on and now are focusing on increasing their product portfolio for the corporate class. Their promotion of cloud services is a fantastic idea to penetrate the data product. If you can subscribe to MTN’s cloud services, it is likely you will migrate to their data services.

This is something Orange Uganda must be getting worried about and for a good reason.

Now that Orange’s Internet Everywhere quality has started attracting some complaints in terms of quality and speed, as many users get on it, their product is reaching saturation point.  As I wrote way back in 2012, Orange seems to be caught up in capacity issues and there is no better time to sell.

The news that Orange Uganda might be up for grabs seem to hold water, considering the analysis above. However, let’s wait and see whether this can materialize. Apparently, like Total Oil, Orange telecom is France’s international flag bearers for business.  Won’t selling the company to another be like bowing down? Hope you understand.

Note: Do you want to grow and achieve life success, I provide private mentorship to CEO’s and ambitious young people. Give me a shout so that I may help you succeed. I’ve.  But first, subscribe to my Weekly Newsletter, M.B. Mugisa’s Monday Morning Executive Briefing.

Sacraments are Instruments of God’s Grace 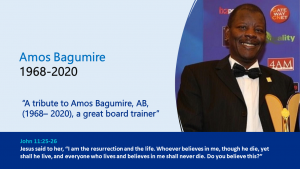