Appreciate your family to improve it

The family is where the human bond is honest

A story puts it that a mother lost her soldier son and the news of his death came to her in dispatches from the war. He had died while fighting nobly at the head of his regiment. His mother was disconsolate. ‘If only I could see him again just for five minutes.’

An angel heard her prayer. ‘For five minutes’, said the angel, ‘you will see him’. ‘Quick, quick,’ said the mother, her tears turned to momentary joy. ‘Yes’, said the angel, ‘but think a little. He was a grown man and there are 30 years from which to choose. How would you like to see him?

‘For a moment, the mother paused and wondered. The angel continued, ‘would you want to see him at his post, brave in the face of danger? Would you see him again as on that day he was being awarded at school? Would you see him when he was a newly born baby?’

After a while, the mother began, slowly, ‘No, I would see him for five minutes as he was one day when he ran in from the garden to ask my forgiveness for having done something wrong. He was so small and so unhappy, and the tears were making streaks down his face through the garden dust. He flew into my arms with such force that he hurt me’.

The one thing that the mother wished to recapture was the moment when her son needed her. There is nothing more moving in life than to hear another say, ‘I need you; I cannot do without you.’ This story reminds us of what we can celebrate at two levels: the gift of an ordinary family where we share our need, sorrows, joys, and hopes; and the gift of an extraordinary is ready to raise any of its members from any unthinkable situation.

God communicates salvation to humanity through the family

Of all options at His disposal, God chose to communicate the gift of salvation through a human family. In reality, God is a family identified in the title on the Trinity from where He relates with human beings as a parent known as God the Father, as sibling in the person of Jesus and of a driving life force known as the Holy Spirit. This divine family has its prototype in the human family of Mary, Joseph, and Jesus which in turn inspired human families through the centuries.

In their care for one another despite difficulties, misunderstandings, and struggle, the Holy Family remains the model for nuclear families everywhere. These families, in turn, have the potential for becoming a worldwide family of persons bonded not by genes or vows but by faith.

The Holy Bible bonds the family together

Biblical writings like Sirach, Letters of St Paul, and the four Gospels; all hold out the idea of family for our consideration. Alongside that ideal, we are to be aware of the problems of using the image of the family in the liturgy.

Many people spend years trying to overcome the psychological burdens of a destructive family system. Many argue that the imagery of God as Father and Christ as Son reflects only the patriarchal society from which it arose and is now incompatible. Yet life remains in the image and some of its other possibilities are seldom explored.

To that end, it may be helpful to realize that the New Testament offers other examples of the family that are more in keeping with brotherhood or sisterhood. Take, for example, the family of Martha, Mary, and their brother Lazarus, or even the growing group of followers of Jesus who recognized themselves as sisters and brothers of one another because of their union in him. These families were bound by faith, shared service, and economic needs. Thus the family imagery carries with it a dimension of justice based on the responsibility that derives from shared faith. By being born in a family, we are connected to others. These connections are not a matter of choice. We are not allowed to choose only a few; instead, we are to see the small, tear-streaked faces of the vulnerable as our brothers and sisters who contribute to making our family happy and real.

Good families are made through homemade humour and mutual respect

Happy families own a surface similar to good cheer; they like each other which is quite different from loving one another. Among themselves, they have one hidden treasure which is ‘homemade humour’ that they have accumulated before rainy days and difficult times. Their humour is not necessarily amusing. Their jokes may not be appreciated by outsiders and their laughter can arise from the most trivial sources, but their happiness belongs entirely to the family. While they may have had their treasures of humor to ease the struggles of daily living, families in the ancient world were also bound to one another by a strict code of honour. Even where children harbor no natural love for their parents, they are duty-bound to honor them. This societal ethic was affirmed in the Decalogue, where the mandate to ‘honor your father and your mother’ followed immediately after the commandments of God and right before those that conceived other human relationships cf. Exodus 20:2.

The forgotten honor is harming the family today

The term ‘honor’, carries with it a range of connotations far broader than mere obedience. To honor was ‘to show respect’, ‘to glorify and exalt’, ‘to care for’. Wise people who lived during the era of balanced human traditions alluded to the reward and blessing that would come to those who honored their parents. For example, the call to honor parents in the fourth commandment was followed by the stipulation: “that you might have a long life and prosperity in the land which the Lord your God is giving you” Deuteronomy. 27:16. By the time some wise people offered this wise counsel on the subject, the ‘stake’ had increased, and honoring parents was described as atonement and a platform from which the debt of one’s sins could be resolved. Honoring parents guaranteed any community blessings that would survive generations due to the joy experienced. In a lifetime any sensible person needs to be aware of the life cycle humans undergo. Anyone who is now young will one day be old and this serves as a reminder that grown children to accept the responsibility of aging parents ‘even if their minds fail’, their fate can be every person’s experience. For sure such caregiving roles are difficult to assume. For that reason, each one of us should find some encouragement from any reliable source to grace us with the strength, patience, and courage to continue to bless one another in selfless love.

The remedy is in mercy, mutual care, and compassion

In which place do you find yourself at the best of your self, confident and free! Is it when you are in Church? With friends? While listening to music? Have you ever asked yourself why this happens that way? Perhaps this is the reason why relaxing places including the family realized that some of its most transformative moments might be traced to the power of dance, hymns, and songs. It is not strange therefore that the human community couched some of its most important teachings in musical form. Whenever people are in a gathering some kind of poetic dialogue that depicts mutual care and compassion is spontaneously extended to one another in a familiar tone. It is by such poetic creations, inspired by community spirit, that human beings come to consolidated and give positive energy which in turn strengthens and defends their being.

Most expectant parents admit having had dreams about their new child during months preceding the child’s birth. Some dreams centre on the child’s future career as others focuses on some special contribution their children may offer humanity. After the child is born, these dreams are often relegated to a distant memory as the reality of nurturing and guiding this actual new life sets in.

In the ancient world, however, dreams were not so easily forgotten, as is reflected in both the Jewish and Christian Scriptures. Dreams were regarded as nocturnal vehicles for special communication. In Genesis Joseph’s dreams saved the world of time from famine caused by a prolonged drought. These dreams were also rooted in formula citations to illustrate the fulfilment of messianic expectations.

In this era and time, we must congratulate the families that have remained true to ideals by retaining the best values of our African family. We must guard against some virulent ideological poisons from abroad, claiming to be ‘modern culture’. Those that are married should continue to welcome children as a gift from God and train them to remain human.

Our families need to understand what is good and how to achieve it. We must know that to love people is hard but not impossible to achieve. In our families today, it is important that men learn how to be real men while women learn to be real women. Whatever sacrifices were done to fulfil this must be considered worthwhile and fulfilling. Times have changed, but the purpose of God for the family is the same: to raise good and responsible citizens. 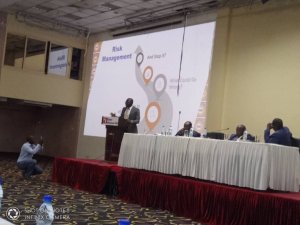 Ministry of Finance sets June 15 to settle all salary arrears

Hon. Maria Kiwanuka on the spot light over NSSF